Don't Waste My Time: How To Beat All Your Competition On YouTube (Paperback) 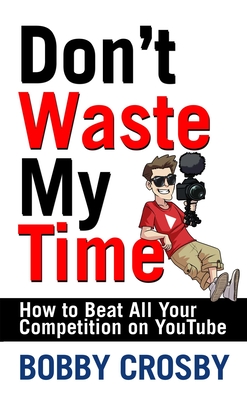 Don't Waste My Time: How To Beat All Your Competition On YouTube (Paperback)


Usually Ships in 1-5 Days
The ultimate no-nonsense guide to making it big on YouTube, written by a guy with a million subscribers and half a billion views.

The more successful you are on YouTube, the more often you're asked for advice on how to do it. Like anyone with a million subscribers, Bobby Crosby has been asked that question thousands of times. Over the years, he answered that query from friends with longer and longer e-mails, until one day he decided it would be easier to just hand them a book, so he wrote this. Don't Waste My Time is the inside scoop that a YouTuber tells their friends, and it doesn't waste time on a pointless autobiography or on a glossary of terms that you already know. It's a short book not because it's light on substance but because it's light on filler, like your videos should be.

Crosby achieved mild success in his first eight years on YouTube, but his channel blew up in 2016 after he implemented strategies that he discovered from a deep dive of his own analytics. In this book, you will learn those strategies to earn badges. Each badge represents a certain percentage of YouTubers that you're now better than simply for learning that one skill. Earn all 24 badges to beat all of your competition.

The goal of this book isn't simply to help make you a professional YouTuber. If the advice is followed correctly, you'll be able to live off your videos for the rest of your life, like the creator of a popular TV show that goes into syndication.

In the past four years, Crosby has only worked about five hours per week on YouTube and his channel has made several million dollars. He achieved this without anything going viral, without any bad clickbait, without any collaborations with bigger YouTubers, without heavily promoting merchandise, without doing many sponsored videos, without photoshopping any thumbnails, without ever hiring an editor, and without ever buying any advertising. He also accomplished this with types of videos that aren't normally very popular. Almost all of his videos are either real life softball games with friends, or gaming videos where he plays a baseball video game very poorly. Don't Waste My Time explains how he did it and how you can too.