Treason to Whiteness Is Loyalty to Humanity (Paperback) 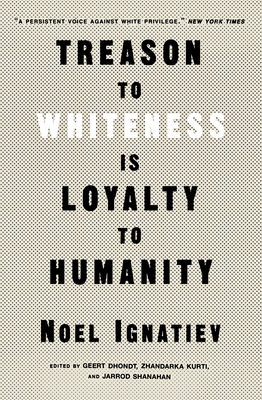 Treason to Whiteness Is Loyalty to Humanity (Paperback)


Coming Soon - Available for Pre-Order Now
A new collection of essays from the bomb-throwing intellectual who described the historical origins and evolution of whiteness and white supremacy, and taught us how we might destroy it.

For sixty years, Noel Ignatiev provided an unflinching account of “whiteness”—a social fiction and an unmitigated disaster for all working-class people. This new essay collection from the late firebrand covers the breadth of his life and insights as an autodidact steel worker, a groundbreaking theoretician, and a bitter enemy of racists everywhere.

In these essays, Ignatiev confronts the Weather Underground and recounts which strategies proved most effective to winning white workers in Gary, Indiana, to black liberation. He discovers the prescient political insights of the nineteenth-century abolition movement, surveys the wreckage of the revolutionary twentieth century with C.L.R. James, and attends to the thorny and contradictory nature of working-class consciousness. Through it all, our attentions are turned to the everyday life of “ordinary” people, whose actions anticipate a wholly new society they have not yet recognized or named.

In short, Ignatiev reflects on the incisive questions of his time and ours: How can we drive back the forces of racism in society? How can the so-called “white” working class be wn over to emancipatory politics? How can we build a new human community?"
Noel Ignatiev was born in Philadelphia, the son of two Russian-Jewish immigrants. He was a life long revolutionary, a long-time steel worker in Gary, Indiana, the author of How the Irish Became White, and co-editor of the journal Race Traitor, an anthology from which won an American Book Award. He spent years debating in the Students for a Democratic Society, where he coined the term “white skin privilege” before going on to agitate on the factory floor for twenty years with the Sojourner Truth Organization. Later, he became an unlikely Harvard PhD grad, a renowned historian, and an untempered firebrand on the main political and cultural issues of our time.
“This book is the gift of a life well-lived—as steelworker, scholar, race traitor, and fierce anti-racist. Noel Ignatiev had a singular and memorable voice, here preserved for posterity. We will need his ideas and example moving forward.”
—Marcus Rediker, author of The Slave Ship: A Human History

“This collection of Noel Ignatiev’s writings over the past six decades could not come at a more important time in the struggle against white supremacy; they are as pertinent today as they were when they were written.”
—Roxanne Dunbar-Ortiz, author of An Indigenous Peoples’ History of the United States

“Ignatiev demonstrated the transformative power of working-class stories. His radicalism was always tethered to specific people, who, in their own ways, inspired sympathy and a desire for connection. That specificity will always be relevant; it may be especially so at a moment of cynical alienation, when identities have become recitations rather than communities.”
—New Yorker

“Noel Ignatiev was a tiller in the field of identity studies long before most of us even knew there was such a field. Beyond that, he located the field at the crossroads of race and class. He was an important, innovative thinker, as well as a committed activist for social justice.”
—Russel Banks, author of Continental Drift and Cloudsplitter

“Noel Ignatiev was a giant in one of the most important fields of research to emerge in recent times: how was it that those who had been warring on the shores of Europe on religious and ethnic grounds were magically transformed upon crossing the Atlantic into the new Identity Politics of ‘whiteness’? As the brilliant Ignatiev correctly suggests, the survival of humanity may very well hang on understanding this phenomenon—then acting decisively.”
—Gerald Horne, author of White Supremacy Confronted: US Imperialism and Anti-Communism versus the Liberation of Southern Africa, from Rhodes to Mandela