My War in the Jungle: The Long-Delayed Memoir of a Marine Lieutenant in Vietnam 1968-69 (Paperback) 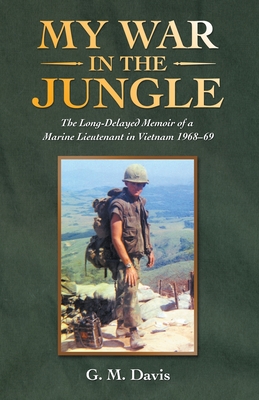 This memoir tells the story of a Marine rifle platoon commander's time in the mountainous jungle of the northernmost province of the then Republic of Vietnam. While tasked with fighting the enemy, G.M. Davis made some great friends ... but saw too much death. The author tracks his tour of duty in the jungle, leading Marines not against the Viet Cong but against the North Vietnamese Army, a well-trained and well-supplied professional army dedicated to unifying the two Vietnams. The heat, the worry, the responsibility and the daily grind took a toll amid firefights, battles, victory, and loss. Contact with the enemy was frequent, and the chaos of even a small fight was daunting. Davis also examines the political reality of the time, arguing that the war was lost before it began, but that the nation kept fighting and losing soldiers so politicians could look strong and keep their jobs. Looking back at the war, he concludes it was a waste of lives and treasure.