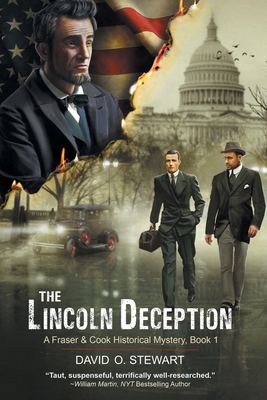 "A taut, suspenseful, terrifically well-researched historical thriller about the greatest crime of the 19th Century." William Martin, New York Times Bestselling Author of The Lincoln Letter and Bound for Gold.

In 1900, former Congressman John Bingham tells his doctor, Jamie Fraser, about a terrible secret he learned thirty-five years ago while prosecuting John Wilkes Booth's co-conspirators in the assassination of Abraham Lincoln--a secret that could destroy the republic. Then Bingham dies before revealing what he knows.

While dodging race riots, kidnappers, and muggers, elusive clues reveal an alliance between the nation's foremost cotton tycoon--with connections to a Northern pro-Confederacy faction--and the last general of the Confederate Army.

Now face-to-face with the treacherous pair, Fraser and Cook must survive long enough to expose the deception thrust upon the entire nation.

Publisherʼs Note: The Fraser and Cook Historical Mystery Series will be enjoyed by fans of American history and period mystery novels. Free of graphic sex and with some mild profanity, this series can be enjoyed by readers of all ages.

"...more than enough to satisfy any reader of historical whodunits...its conclusion has a wry double edge that Lincoln himself would have appreciated."--Washington Post

"...a rip-snorting tale about those involved in the assassination of President Abraham Lincoln. What secret did Union prosecutor John Bingham carry to the grave...did the conspiracy involve more than John Wilkes Booth?"--Frank J. Williams, Founding Chair of The Lincoln Forum and retired Chief Justice, Rhode Island Supreme Court

"The Lincoln Deception is a superb melding of fact, mystery, and imaginary 'what-ifsʼ that blow open the conspiracy shrouds surrounding the murder of a president."--GateHouse News Service

"David O. Stewart dramatically reopens the file on the Lincoln assassination conspiracy with a nail-biting, historically grounded page-turner. Where the facts end and the fiction begins will inspire plenty of debate. Meanwhile, enjoy this for the terrific read Stewart provides."--Harold Holzer