Working Toward Whiteness: How America's Immigrants Became White: The Strange Journey from Ellis Island to the Suburbs (Paperback) 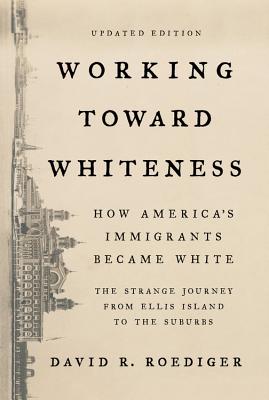 Working Toward Whiteness: How America's Immigrants Became White: The Strange Journey from Ellis Island to the Suburbs (Paperback)


Backordered
How did immigrants to the United States come to see themselves as white?
David R. Roediger has been in the vanguard of the study of race and labor in American history for decades. He first came to prominence as the author of The Wages of Whiteness, a classic study of racism in the development of a white working class in nineteenth-century America. In Working Toward Whiteness, Roediger continues that history into the twentieth century. He recounts how ethnic groups considered white today-including Jewish-, Italian-, and Polish-Americans-were once viewed as undesirables by the WASP establishment in the United States. They eventually became part of white America, through the nascent labor movement, New Deal reforms, and a rise in home-buying. Once assimilated as fully white, many of them adopted the racism of those whites who formerly looked down on them as inferior. From ethnic slurs to racially restrictive covenants-the real estate agreements that ensured all-white neighborhoods-Roediger explores the mechanisms by which immigrants came to enjoy the privileges of being white in America.

A disturbing, necessary, masterful history, Working Toward Whiteness uses the past to illuminate the present. In an Introduction to the 2018 edition, Roediger considers the resonance of the book in the age of Trump, showing how Working Toward Whiteness remains as relevant as ever even though most migrants today are not from Europe.
David R. Roediger is the Foundation Professor of American Studies at University of Kansas. The author of The Wages of Whiteness, among other books, he lives in Lawrence, KS.
"Provocative."—Washington Post

"Working Toward Whiteness is a tour de force. This book will be the point-of-departure for future studies of 'whiteness.'"—Rudolph J. Vecoli

"If race is real and not just a method for the haves to decide who will be have-nots, then all European immigrants, from Ireland to Greece would have been 'white' the moment they arrived here. Instead, as documented in David Roediger's excellent Working Toward Whiteness, they were long considered inferior, nearly subhuman, and certainly not white."—Mother Jones

"David Roediger has given us another of our most compelling, incisive, and elegant analyses of racial subjugation and privilege-in-the-making in the United Sates. Working Toward Whiteness is a brilliant investigation of that historical zone where institutions, ideas, and street-level experiences meet and give form to one another. It may be Roediger's most powerful contribution yet. An exemplary work."—Matthew Frye Jacobson, authorof Whiteness of a Different Color and RootsToo: White Ethnic Revival in Post-Civil Rights America