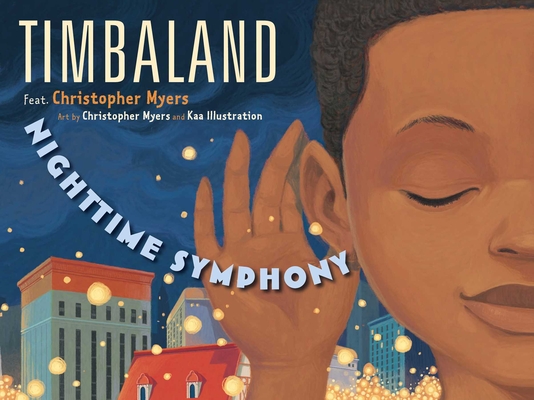 
Usually Ships in 1-5 Days
The sounds of the city at night create a lively lullaby in this melodious bedtime story from superstar producer and musician Timbaland, Caldecott Honor–winning illustrator Christopher Myers, and Kaa Illustration!

hey there, darling baby child,
you’re safe in here though the storm is wild
the streetlights glow through dark so deep
but safe in sound you’ll go to sleep

As a little boy gets ready for bed, the sounds of a wild storm echo around him, lulling him to sleep. From the crash of thunder to the pitter-patter of raindrops to the beat of passing cars, the music of the city creates a cozy bedtime soundtrack.
Timbaland is a multi-platinum Grammy Award–winning producer and artist. His indelible imprint has stamped countless recordings with successful and legendary artists such as Justin Timberlake, Aaliyah, Madonna, Missy Elliott, One Republic, Beyoncé, Jay-Z, and many others. In 2006 he founded his music label, Mosley Music Group, and was also the producer for the hit TV series Empire. Timbaland currently lives in Florida with his family. Nighttime Symphony is his first book for children.

Kaa Illustration is a studio based in Ho Chi Minh City comprised of illustrators Phung Nguyen Quang and Huynh Kim Lien. Their stunning, vibrant illustrations are inspired by the folk culture of Vietnam and Asia. Visit them at KaaIllustration.com.
* “Sophisticated. . . . Brilliant golds, slate grays, and bright vermilion show passersby, a parade of umbrellas, and an elegant cityscape, and the sleek aesthetic gives the city’s wet streets and glowing windows all the surprising glamor of a thumping storm."
— Publishers Weekly, starred review

“Through rhyming couplets, an African American father teaches his son to look at a nighttime rainstorm in a positive manner instead of being frightened. . . . This optimistic poem has the ability to turn a potentially scary bedtime into an enjoyable, relaxing experience.”
— Booklist

"In this charming poem, Timbaland, Myers, and Kaa Illustration join forces to bring the music of the night to life. Full-page spreads of rich, digitally rendered illustrations mix harmoniously with the lyrical groove of the tapping of rain, rolling thunder, and honking cars create a treat for readers’ eyes and ears. . . . Beautiful illustrations and a soothing lullaby make this a solid purchase for school and public libraries."
— School Library Journal

“Timbaland's rhyming text is musical both in content and feel, the words beating out a rhythm as a father speaks comfortingly to his child. . . . The digital illustrations feature saturated colors—bright reds and yellows especially—that brighten up every rainy page, making the storm anything but dreary.”
— Shelf Awareness