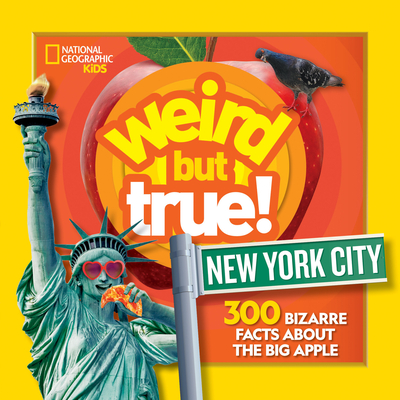 Did you know that 25 species of shark swim off NYC's coastline?

Or that astronauts can see the lights of Times Square from space?

And get this: In New York, Sesame Street is a real place AND there's a library where you can visit the actual stuffed animals that inspired the characters in Winnie the Pooh!

Explore 300 wacky facts and pictures from the five boroughs. You'll get a look at the city's storied past, learn about weird stuff in New York today, and even meet a couple of goats that held up traffic on the subway. The city that never sleeps truly has something for everyone--from giant pillow fights to epic Broadway musicals to pizza-loving rats.

Whether you're an NYC native, an adventure-loving tourist, an armchair traveler, or a trivia buff, this fact-packed, fun-filled book is for you!

For more quirky facts and interactive fun, check out The Nat Geo Kids Challenge on Amazon Alexa for over one hundred rounds of “Weird but True …or False!” Available now through Amazon Kids+ subscriptions.
NATIONAL GEOGRAPHIC KIDS inspires young adventurers to explore the world through its award-winning books, magazines, website, television series, radio show, games, and events, and is the only major kids brand with a world-class scientific organization at its core.