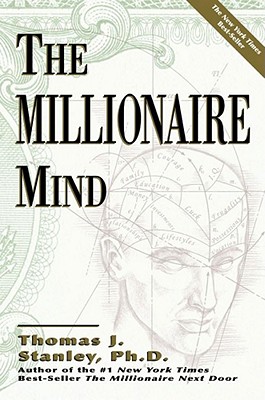 
Usually Ships in 1-5 Days
"Readers with an entrepreneurial turn of mind will devour The Millionaire Mind because it provides road maps on how millionaires found their niches."After its first publication, Dr. Thomas J. Stanley's second best-seller The Millionaire Mind spent over four months on the New York Times best-seller list, rising to position #2, and has sold over half a million copies. Here is the first paperback edition of Stanley's second groundbreaking study of America's wealthy.

The Millionaire Mind targets a population of millionaires who have accumulated substantial wealth and live in ways that openly demonstrate their affluence. Exploring the ideas, beliefs, and behaviors that enabled these millionaires to build and maintain their fortunes, Dr. Stanley provides a fascinating look at who America's financial elite are and how they got there.

*How did they respond to negative criticism?

*What are the characteristics of the millionaire's spouse?

*Is religion an important part of their lives?

The author uncovers the surprising answers to these and similar questions, showing readers through concrete examples just what it is that makes the wealthy prosper when others would turn away dejected or beaten.

The Millionaire Mind promises to be as transformational as Dr. Stanley's previous best-seller. This book answers universal questions with solid statistical evidence in an approachable, and anecdotal style. The number of copies sold of this soon-to-be-classic will surely be in the millions.
Dr. Thomas J. Stanley began studying the affluent in 1973. His coauthored best-selling book, "The Millionaire Next Door," released in 1996, has sold 2,000,000 copies. Thomas followed his first book with "Marketing to the Affluent," ranked among the ten outstanding business books by the editors of "Best of Business Quarterly." In 1999, he published "The Millionaire Mind," which explored America's financial elite and how they became so. "The Millionaire Mind" has sold 750,000 copies. The author lives in Atlanta, holds a doctorate of business administration from the University of Georgia in Athens and was formerly a professor of marketing at Georgia State University.