H Is for Harlem (Hardcover) 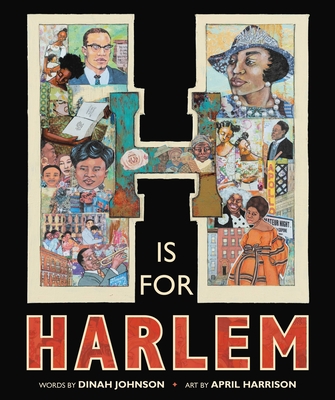 H Is for Harlem (Hardcover)

Discover the Harlem icons that have defined generations of American culture. Harlem is full of remarkable treasures, including museums, performance spaces, community centers, and more—all of which come to life in this lavish celebration of Harlem as an epicenter of African American history and a vibrant neighborhood that continues to shape our world. At once a love letter and a rich alphabetical archive, H Is for Harlem highlights communities and traditions that connect our past and present.
Dinah Johnson is the award-winning author of many books for young readers, including Black Magic, illustrated by R. Gregory Christie; Hair Dance! with photographs by Kelly Johnson; Quinnie Blue, illustrated by James Ransome; Sunday Week, illustrated by Tyrone Geter; and All Around Town: The Photographs of Richard Samuel Roberts. A professor of English at the University of South Carolina, she lives in Columbia, South Carolina. She invites you to visit her at dinahjohnsonbooks.com.

April Harrison, a renowned folk artist, is the Coretta Scott King/John Steptoe New Talent Award–winning illustrator of Patricia C. McKissack’s final picture book, What Is Given from the Heart, which received four starred reviews and which the New York Times Book Review called an “exquisite story of generosity.” Her work appears in the public collections of Vanderbilt University, Virginia Commonwealth University Medical Center, the Atlanta Housing Authority, and the Erskine University Museum, as well as in many private collections. She invites you to visit her at www.april-harrison.com.
Praise for H is for Harlem:
An Amazon Best Book of the Month
A Junior Library Guild Selection

* "Historically rich…. Harrison’s stunning, colorful, highly textured illustrations complement and expand upon Johnson’s textual snapshots, which offer just enough detail to encourage children to deepen their knowledge of Harlem. This is a beautiful and welcome celebration of Black joy. A gem that whets the appetite to learn more about a city where art is as alive as the people who live there."—Kirkus Reviews, starred review

* "Sumptuous and necessary… Harrison’s mixed-media illustrations are meant to be savored for their layers of detail. Light seems to shine through these stunning, vibrant pages. Would that the English alphabet had more than 26 letters so that H is for Harlem could have been longer."

* "An ode to the beating heart of African American culture with remarkable depth and breadth. This title is a celebration of Harlem’s vibrancy, dynamism, and significance."—School Library Journal, starred review

* "Harrison’s arresting mixed-media illustrations render the abundant cast of important figures and myriad, unique surroundings in lifelike shades, lush textures, and generous dimensions, showing, as Johnson writes, that 'Harlem is a place like no other in the world.'"
—Publishers Weekly, starred review

* "Engaging and beautiful … What a splendid way to learn the alphabet!"