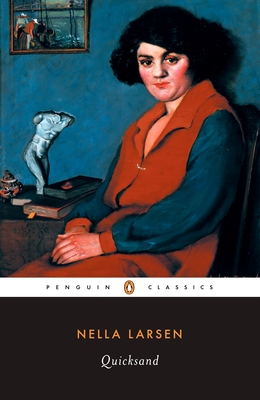 Born to a white mother and an absent black father, and despised for her dark skin, Helga Crane has long had to fend for herself. As a young woman, Helga teaches at an all-black school in the South, but even here she feels different. Moving to Harlem and eventually to Denmark, she attempts to carve out a comfortable life and place for herself, but ends up back where she started, choosing emotional freedom that quickly translates into a narrow existence.

Quicksand, Nella Larsen's powerful first novel, has intriguing autobiographical parallels and at the same time invokes the international dimension of African American culture of the 1920s. It also evocatively portrays the racial and gender restrictions that can mark a life.

For more than seventy years, Penguin has been the leading publisher of classic literature in the English-speaking world. With more than 1,700 titles, Penguin Classics represents a global bookshelf of the best works throughout history and across genres and disciplines. Readers trust the series to provide authoritative texts enhanced by introductions and notes by distinguished scholars and contemporary authors, as well as up-to-date translations by award-winning translators.

Nella Larsen (1891-1964) was the author of two novels and several short stories. She received a Guggenheim fellowship to write a third novel in 1930 but, unable to find a publisher for it, she disappeared from the literary scene and worked as a nurse.

Thadious M. Davis is the G. C. Vanderbilt Professor of English at Vanderbilt University, the author of an acclaimed biography of Nella Larsen, and the editor of Larsen’s Quicksand for Penguin Classics.

"Fine, thoughtful and courageous. It is, on the whole, the best piece of fiction that Negro America has produced since the heyday of [Charles] Chesnutt." —W. E. B. Du Bois